If you want browse zenotech.com, please turn on Javascript in your browser. Thank you!

EPIC offers you a different way to pay for your HPC but it’s often hard to know if this will save you money or not. In this post we will illustrate a typical scenario and explore the cost of an in-house cluster vs. EPIC. Consider a medium sized engineering company that runs structural analysis simulations on a 10 node in-house cluster. The simulations are requested by the design team once a week and tend to run over the weekend ready for Monday morning. How much is this costing in terms of HPC?

The in-house cluster has 10 nodes each with two 16 core CPUs, giving a maximum job size of 320 cores. When looking at the cost of the in-house cluster you need to factor in all of the costs associated with it. This includes the hardware cost, the cost of storage, networking, power and cooling. You also need staff capable of administering the cluster. Based on our experience in the industry, a conservative estimate for these costs brings the cost of the in-house cluster to around 4 pence per core hour. So the 320 core cluster is costing £12.80 an hour. This cost is 24/7, 365 days a year, no matter how much the company uses the cluster.  This is probably not a problem if your cluster is highly utilized but if your workload is not steady, which is often the case, then there are periods where your cluster is not being used but is still costing you money. In our example we know that the cluster is really only used over the weekend and idle for the majority of the week. If assume that the cluster is fully utilised over the weekend and then idle of the week then the cluster utilisation is around 30% (it may be more than this if some jobs run during the week or less if the cluster is idle during holiday periods).

Taken over the year the estimated cost of the cluster is £112,128 and with our weekend utilisation that works out to be about £2,155 per weekend job.

EPIC uses a pay as you go pricing model, you only pay when you use EPIC – there are no subscription charges or maintenance costs. The EPIC cost represents the total cost of the cluster, all the factors we considered in the in-house cluster are wrapped into that cost. Because EPIC uses a range of HPC providers you also get presented with a range of costs. Currently the cost per core hour in EPIC ranges from 5.5p to 12p depending on the provider and hardware selected.  A cluster with a similar configuration to the in-house cluster currently costs around 6p per core hour. If we assume that our weekend jobs take all 320 cores and run for 48 hours then the job in EPIC would cost around £920. This offers a significant saving against the £2,155 we calculated for the job on the in-house cluster.

Is it always cheaper?

The main factor you should consider when deciding if EPIC is cheaper than your current solution is your cluster utilisation. As you saw in the example, EPIC was cheaper than the in-house equivalent because the cluster was an ongoing cost no matter how much it was used, whereas with EPIC you just pay for compute when you need it. The graph below shows the cost of the cost versus the utilization for both the in-house and EPIC option. 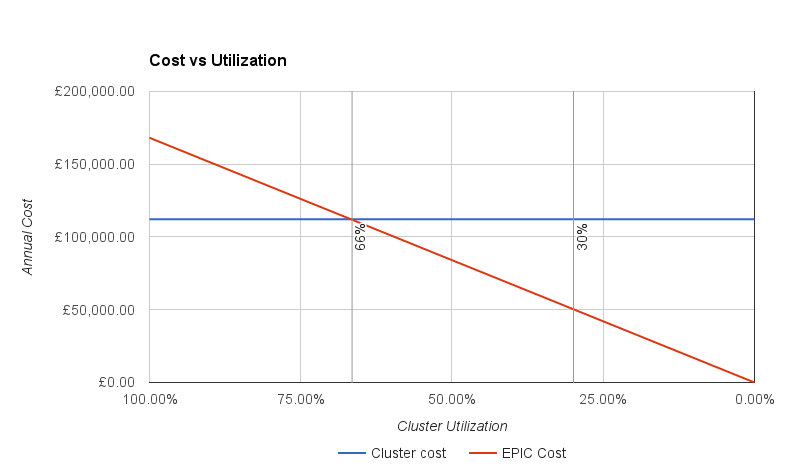 As you can see when the cluster is utilised above 66% of the time then the in-house cluster is cheaper than EPIC, below that figure then using EPIC on demand becomes the cheaper option. At our weekend utilisation of 30% then the annual savings are significant.

Leave a reply Click here to cancel the reply